Writing A Book: The Process & Your Questions Answered

With the book having been released just over a month ago, and the dust having settled after the tour- I thought it would be a nice time to pop together a post talking about the process itself- because honestly? Before I started I didn’t have a Scooby what it would entail- which, honestly, is a polite understatement.

I mean, come on- the idea of writing a book- AN ACTUAL BOOK. One people would buy, felt mammoth. For someone who hadn’t even tackled a dissertation, the prospect of 50,000+ words felt overwhelming. The charm about my funny old career, is that although a large percentage of it is built up of writing- typically, it’s me, babbling on- grammatical errors aplenty, going in any which direction to people that are probably just looking to see where my cardigan is from- a book is official. There are hundreds of eyes on it- and not just that, you want it to be useful. Christ, of course you do. In a world with millions of books, thousands of authors and a growing market of ‘blogger books’- I didn’t want it to just be another book people didn’t really need from someone who wasn’t traditionally a writer- the insecurity around that alone was overwhelming. Because honestly, if the idea for The Insecure Girls’ Handbook hadn’t come to me, I probably wouldn’t have written anything at all. I just didn’t want to let anybody down.

ANYWAY. Deep meaningful chats to one side, I thought I’d share with you the process about how it all happened- the how, the why and the how-on-earth-do-I-keep-going. It’s been a true process of lessons, self-discipline and little ‘God, so I really had that in me?’ moments that I thought I’d share, for anyone a little bit nosey and interested like I was- or those that fancy putting pen to paper too. Obviously, it goes without saying I’m no publishing expert and this is just my independent experience.

When I started writing my book, one of the things I found solace in was seeing other people’s processes. I inhaled Anna’s video about her book-writing journey, and despite things not being identical- loved knowing about it from someone else’s perspective. Although incredibly exciting, the whole process was packed with endless new experiences- so seeing somebody else’s account of them felt very reassuring indeed.

From the get go I was in an incredibly privileged position to have a literary agent- the exceptional Abi at Gleam Titles. This meant that with an idea and proposal, they were able to pitch (and hopefully secure meetings) with editors and see if the proposal had any legs, and could work as a book. Almost like having a professional book wing-woman on your side. Although the book began its life as another idea altogether, as cheesy as it sounds, the title for The Insecure Girls’ Handbook came before the proposal and a little like a bolt out of the blue. I think my line was, ‘it’s almost like I need an ‘Insecure Girls’ Handbook or something?!’ After having the initial idea, I went away to put together a proposal- which ended up being 8,000 words with a full introduction, six chapter breakdown and explanation behind the idea, and why- hopefully, it was necessary. I must state that I was incredibly lucky I didn’t need to have a full manuscript prepared (sometimes it’s a ‘shorter’ proposal like mine, but sometimes editors will ask for a full manuscript, from what I’ve been told)!

Anyway- with the proposal sorted, I was lucky enough to have a few meetings with editors arranged, which I was absolutely bricking. For one of my first meetings, my bloody alarm didn’t go off, so I had to virtually run every part of my journey except when I was on a train (I remember putting in my contact lenses in the toilets before I went in). 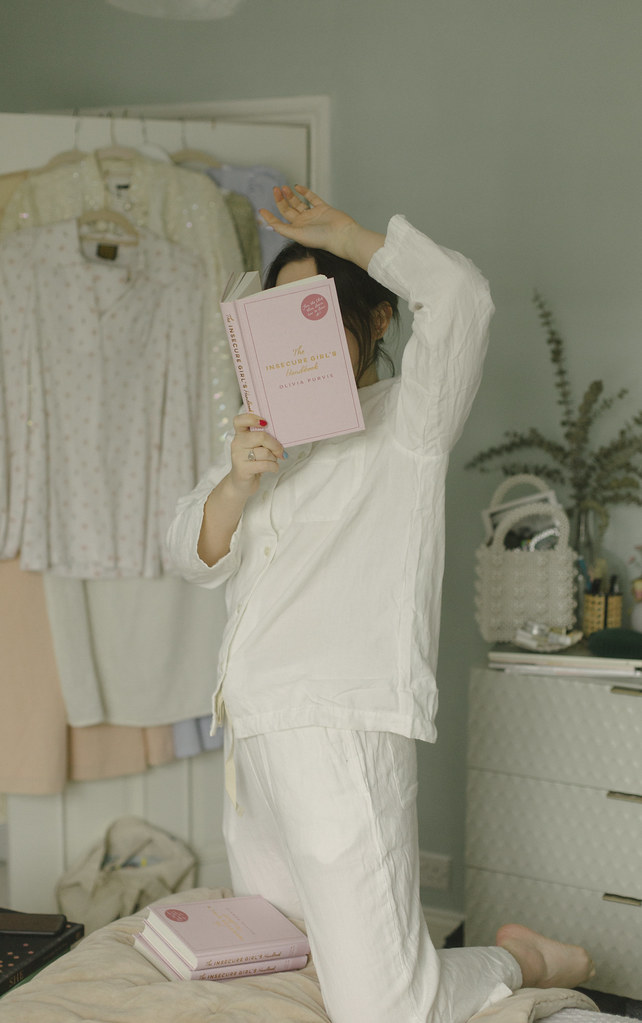 I don’t think I’ve been as nervous about meeting anybody- and although they weren’t scary meetings, I think it was one of the first times I’d been in a proper meeting room having to talk about something without peppering every line with a heavy dose of self deprecation. Halp. I can’t remember how many meetings I had exactly, but rejection was something I had to become comfortable with. I didn’t expect a book deal, and knew this was a risk for anyone- but believing in something, pouring your heart into it, and knowing for whatever reason something wouldn’t quite work is a difficult thing.

Long story short (and we know how this story ends)- I had a meeting with the wonderful warm women at Orion (who bought a series of books they were releasing for me to read- including a proof of Queenie as well as Fearne Cotton’s book) and I was beside myself with joy when they took that leap with The Insecure Girls’ Handbook. They took me under their wing, I’D BLOODY DONE IT. Nearly. The book wasn’t written yet…

This sounds silly, but the process was a lot more independent than I’d imagined. Although we’d had a couple of meetings to talk about chapter structure (each chapter has several different elements, so I wasn’t totally sure how to lay this all out)- I was pretty much on my own (with a wonderful team and editor always at the other end of an email incase of a mild panic, which happened on a handful of occasions). I started writing at the beginning of April last year, tied up my last draft (with stats etc) in September and pretty much finished everything (up until proof stage) in October. Although there were various stages of review (after each chapter my editor would have a look over and give feedback)- but until the whole shebang was complete, I was on my own. After that it went into a copyedit stage (a.k.a a serious fine tooth), page design, typeset (basically LAYING. IT. DOWN) and finally the proofs as the reader will finally see it, which is where I had a final deep read, checking every little detail (and then obviously becoming painfully critical and ‘CHRIST IS THIS JUST SHIT?). It was an intense few months with the wedding coming up as well, but learning the art of serious self motivation, I eventually (after the first chapter at least) got into a bit of a swing and routine with things- knowing how everything was supposed to look, what contributions I needed to make the content rounded and useful- and worked out a way of working that I found manageable, consistent and 9/10 of the time- stress free. Then, press play to publication and it was time to wait until February. AHH.

How did the process start? Did someone approach you with the idea?

I was very fortunate to have met with a literary agent, who was willing and open to hearing my ideas. The idea for the book came from endless conversations with friends and the feeling that I wanted to talk about these common threads of insecurity so many of us were experiencing but not ever really chatting about online, or publicly. I hadn’t really spoken about it much before online, so it was a bit of a scary step, but just something that felt completely apt- a bit of a gut feeling if you like!

Did you work from an outline or just write as you go along with only general themes in mind?

I had a full proposal, which definitely helped break things down and shape the way things were going. So, I had my intro- and then six chapter breakdowns, each with the themes under each chapter umbrella (if you like) that I wanted to cover. I then kind of built a skeleton (e.g. intro – topic – anecdote – interview – solution – conclusion – tips) and kind of built along from that. I also tried to keep in mind that typically a blog post is 1000 words. So, if I’m just writing 50 blog posts, that’s basically it isn’t it? Something like that…

Is it available in the US?

At the moment I know it’s available on Amazon in the states, but I’m hoping one day soon it’ll be stocked wider!

How did you keep yourself motivated through such a long process? How did you manage your time?

I think it was knowing I had deadlines to meet that truly motivated me- I’m a big deadline person and work well under pressure (without sounding like an Apprentice candidate), so this really helped! I scheduled in days during the week where I’d be solely writing- whether that was at home or at a coffee shop, and balanced it with normal routine- like writing blog posts, having meetings and shooting- so that when I was writing I wasn’t mentally flitting between other tasks, and knew that was my assigned time to focus. Equally, if I had a spurt of inspiration on any other day, I’d obviously go for it- but it was just maintaining balance and relative normality where I could.

What did you do when you were stuck or distracted?

Be gentle with myself (although this took a while)! Not every day will be a ‘good writing day’ and not everything I put down on paper was useable/made sense. Some days I’d definitely encounter writers block, so it was definitely about knowing when to walk away and come back to it later and not punish myself if things were flowing or coming to me.

Do you think you’d have had the discipline to finish the book without a publishers deadline?

I’d like to think so! I’m quite good at regularly publishing blog posts and getting things done without formal deadlines (which I know is v e r y different to writing a book)- but it was something I felt passionately enough about that I like to think I would have finished it eventually!

How do you just get started? The process seems so daunting!

After mapping things out- it was just trying to get all my notes ordered and in one place. Even if each chapter was built up of words or phrases, it would be grouping them together- and making sense of things, and then trying to just expand on them and form paragraphs/something that made sense from start to finish. The first chapter was definitely the scariest as I’d never done anything like it before, but once I put something down it became a lot easier to keep going. It’s a bit like using the first page of a notebook, or sketching in a sketchbook you’ve never used before- it’s scary, but once you make the first mark you learn to relax into things a little.

Any advice on how to start writing?

Please don’t hate me for saying this, but honestly? Just do it. Practice, get to know your own tone of voice- and even if it’s not perfect just do it. It won’t ever be perfect the first time you do it, but that’s the magic of keeping going- it will only ever get better the more you do it. Truly. Some of the things I’ve written (probably most) and truly pants, but if you love it- it’s all about flexing that muscle.

You can pick up The Insecure Girls’ Handbook now! (affiliate link)

Previous Post A New York Minute: My Ten Favourite Things To Do In The Big Apple
5
Next Post Reasons To Be Cheerful pt. 3 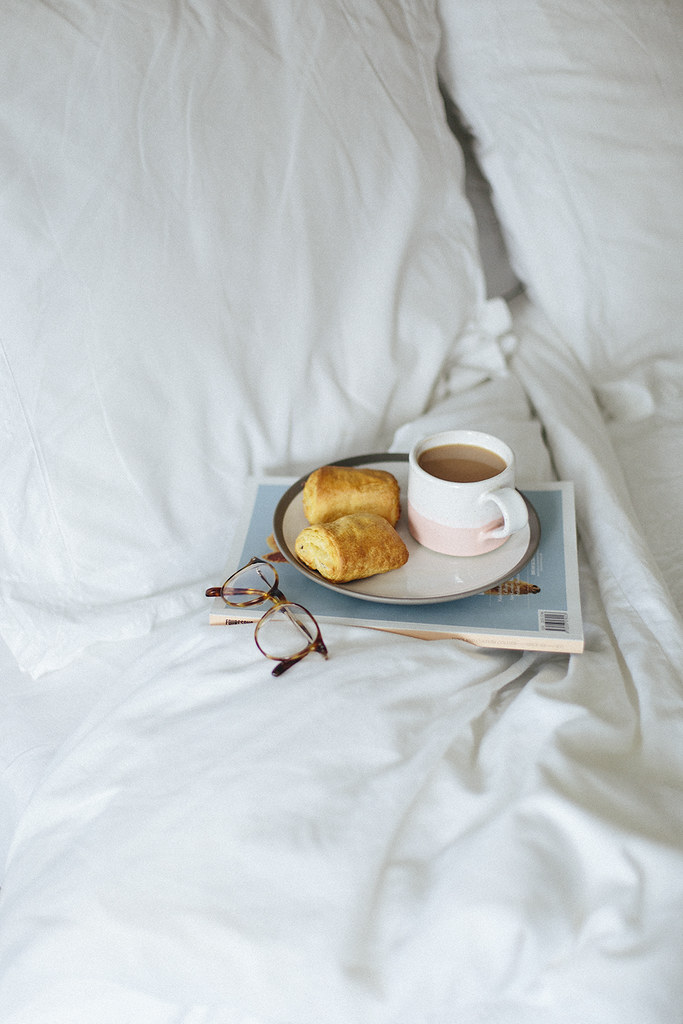 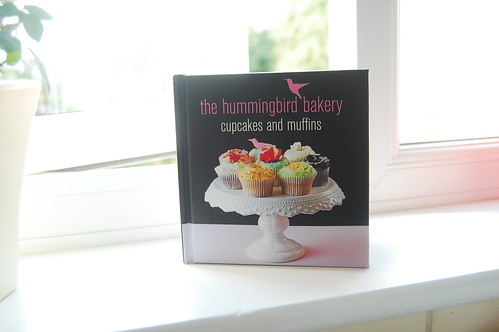 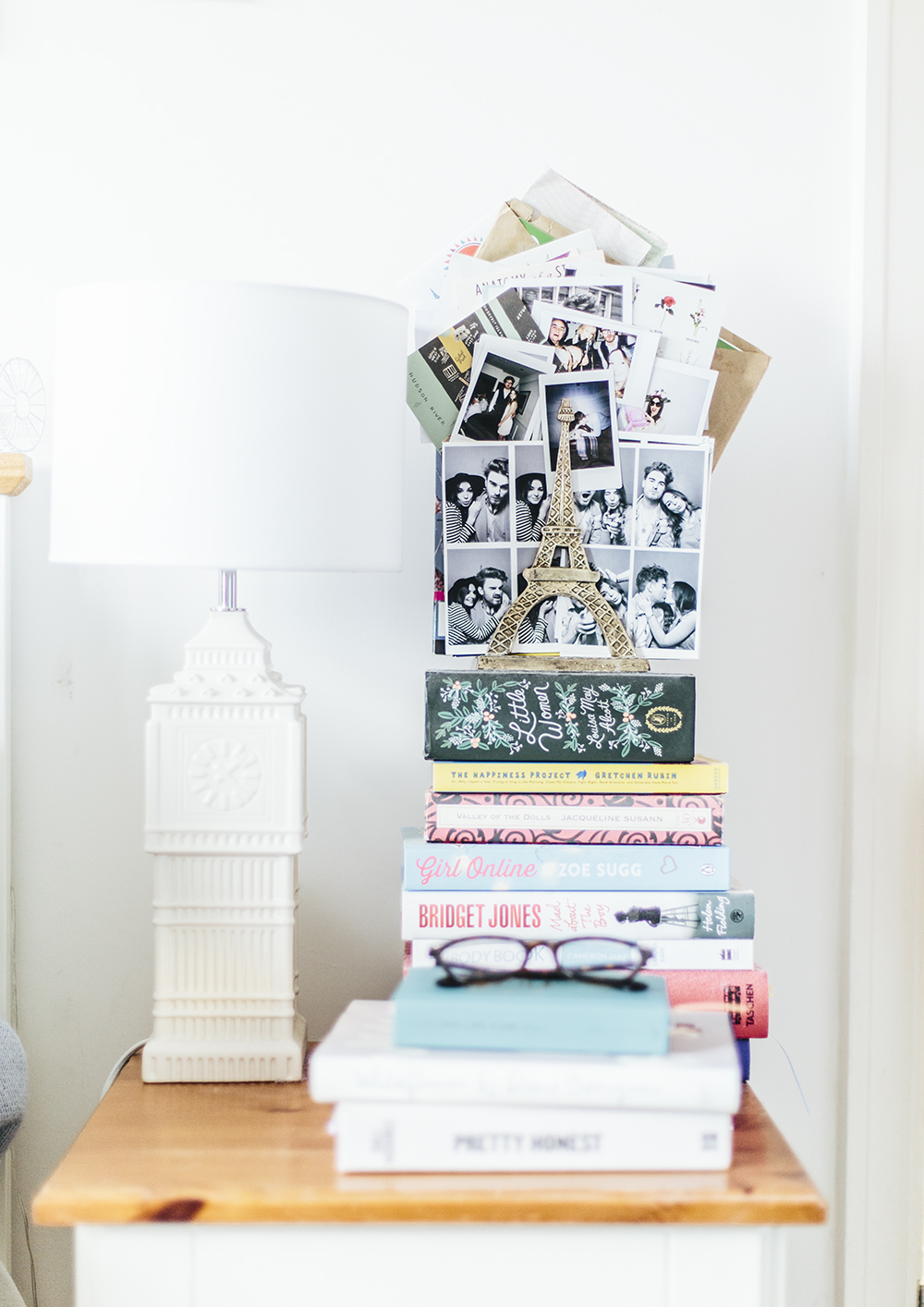